This off-season soccer fitness program can be used in the off-season to develop aerobic endurance, during the pre-season to improve speed and speed-endurance and during in-season workouts to maintain speed-fitness for all athletes!

The following running program has been modified from that developed for professional and collegiate soccer players by Dean Brittenham, former strength and conditioning coach for the Minnesota Timberwolves and Minnesota Vikings. The program can be used in the off-season to develop aerobic endurance, during the pre-season to improve speed and speed-endurance and during in-season workouts to maintain speed-fitness. Run at slower velocities for aerobic endurance and at faster velocities for speed and speed-endurance. Do the drill 2-3 times per week in the off-season and pre-season and 1-2 times per week during the season.

15-30-15 refers to the distances covered in yards in one repetition of running followed by a rest interval. Three running cycles are used each workout. The training distance is 15 yards in the first cycle, 30 yards in the second cycle and 15 yards in the third cycle. Cycles are performed consecutively. Start cycle one by running 15 yards. Stop, recover and run 15 yards. This is two reps. Do 24 reps at 15 yards and then increase the distance to 30 yards in cycle two. Do 18 reps at 30 yards and then reduce the distance to 15 yards in cycle three and do 24 reps.
The distances in the 15-30-15 yard run are specific to baseball and can be used to develop aerobic or anaerobic fitness by changing speed, distance or rest interval between runs. The constant starting and stopping improves the ability to accelerate and decelerate, develops leg strength and produces a conditioning effect superior to that developed with distance running. You can also change running style to make the drill position-specific by changing the starting position. Run forward from a staggered stance in the first workout (one foot forward and one foot back). Move laterally using a crossover step in the second workout. Turn your back to the direction that you are going to run in the third workout and then start with a turn and run movement. For variety, change the starting position. Do 4 reps from a staggered start and run straight ahead. Then, start from a ready position, use a crossover step and break 4 times to the right and 4 times to the left. Next, stand with your back to the starting line, turn and break over the shoulder (turn and run) 4 times in each direction.

Give the program a try. If done as outlined, it will allow you to enter training camp in superior condition, start the season ready to play and maintain speed-fitness throughout the season. 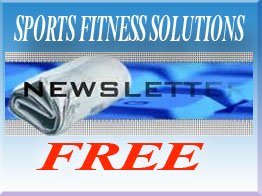 Once each month we'll send you our Sports Fitness Solutions Newsletter, full of ideas and information targeted at helping improve your sports fitness and conditioning.

There will be information regarding: stability, core strength, speed, endurance, fat loss,weight loss, nutrition, your overall fitness,recipes, and other key topics to improve your fitness and your game.

We will also gather guest writers to offer their ideas on fitness in their areas of expertise. We'll also ask for your input for ideas regarding topics that interest you. As well as your comments on each of the newsletters we post.

Our goal for the Sports Fitness Solutions Newsletter is to make it a forum for the free exchange of fitness ideas all targeted toward one goal, improving our overall fitness.

So sign up today. We look forward to you joining the Sports Fitness Solutions Family.